This BLOG is the companion to the KQ web site. http://www.kitchenqueers.com
Here you'll find behind the scenes details about our recipes, cocktails, other ideas in development and more.
Thank you for joining us in our San Francisco kitchen, bar and dining room. 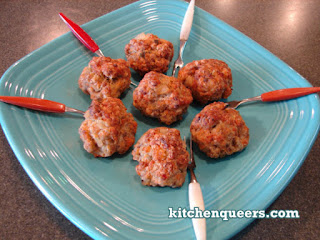 Check out videos for tasty and easy to prepare food items that are sure to please at your next soiree. View the Kitchen Queers YouTube® Channel "Party and Buffet" playlist here:
https://www.youtube.com/playlist?list=PLGc8wXdGFo916nj2aKSOWfoI6vXQ6PkPe

REMINDER: Enlarge the images in this post by clicking on them. 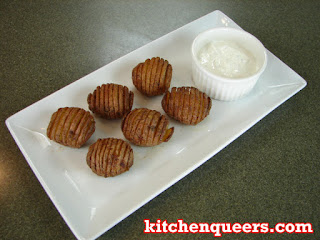 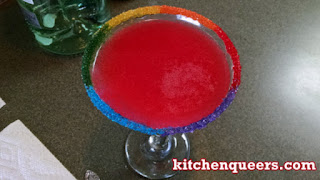 Above: Raspberry Daiquiri with a rainbow sugar rim.

Our good friend Michael Sereno suggested I make a Daiquiri cocktail for a lunch we were planning and so I did some research.  Usually when I think of a Daiquiri, I think of a blended ice type of drink.  However, the original Daiquiri recipe is light rum, lime juice and simple syrup, shaken over ice and served like a Martini.

I did some experimenting, and I came up with a recipe using rum, lime juice, grenadine and fresh, no-cook raspberry coulis.  My partner Chef Philip made the batch of coulis, find his recipe here:
http://www.kitchenqueers.com/food/raspberrycoulis

So when Michael came over for lunch I served this new cocktail, and I'd have to say it was a tasty success.  I had to make a second round!

Look for this recipe in an upcoming episode of Kitchen Queers on YouTube® when KQ Season 3 begins in February! 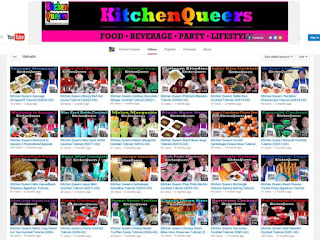 View all 24 episodes from KQ Season 2 on the KQ YouTube channel here:
https://www.youtube.com/playlist?list=PLGc8wXdGFo90BrhiOWaAJzOCo5K1cZ2I7

Check out all of the festive and colorful cocktail episodes on the KQ YouTube® channel, click the image.

This is a smooth salsa that is perfect for those who don't like cilantro. Click the image above to view the video tutorial.

View colorful and festive ideas for setting the table, click the image.

The KQ Three Bean Chili recipe makes for a hearty meal. Check out the recipe by clicking the image. 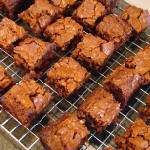 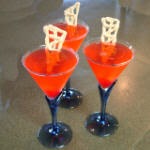 Chocolate lovers and vodka aficionados will adore this flavor combination. And check out our custom white chocolate swizzle sticks, just click the pic. 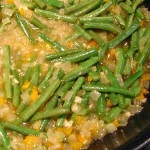